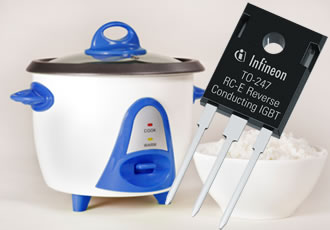 Rice is the first & foremost food for billions of people around the world, especially in Asian countries such as China, India, and Japan, with mass populations. According to Asian Rice Foundation, “Rice is arguably the world’s most important food. It is the second most widely cultivated cereal in the world, after wheat, and is a staple food of over half the world’s population. Rice can be cooked in a variety of ways, including boiling, baking, roasting, frying, and pressure-cooking. Cooking rice in an automatic rice cooker is becoming very popular, as it ensures consistent results and cooking instruction is much simpler to follow”. Many Asian companies have developed rice cookers based up on the induction heating principle. The induction heating can be accomplished by using an induction cooking plate or preferably by using an induction rice cooker. Two types of circuit topologies have been explored for the induction rice cooker. First one is the half-bridge series resonant converter and another is the quasi-resonant converter. The series resonant converter has the advantages of stable switching, low cost, and streamline design. The quasi-resonant converter has the advantage of a smaller design with reduced heat sink. The quasi-resonant converter is more widely used. Due to the large market for these appliances, some semiconductor companies have developed IGBT products optimized for this market for the quasi-resonant converter topology. IGBTs feature a robust and cost effective Field Stop (FS) trench construction, and provide superior performance in demanding switching applications, offering both low on-state voltage and minimal switching loss. IGBTs are well suited for this type of resonant or soft switching applications.