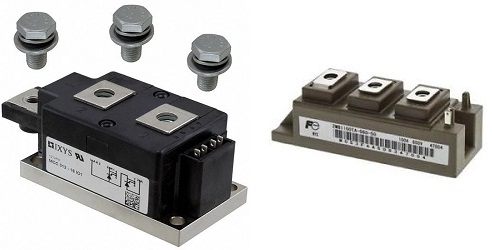 Comparison between Thyristor and IGBT

Thyristor and IGBT (Insulated Gate Bipolar Transistor) are two types of semiconductor devices with three terminals and both of them are used to control currents. Both devices have a controlling terminal called ‘gate’, but have different principals of operation. Thyristor is made of four alternating semiconductor layers (in the form of P-N-P-N), therefore, consists of three PN junctions. In analysis, this is considered as a tightly coupled pair of transistors (one PNP and other in NPN configuration). The outermost P and N type semiconductor layers are called anode and cathode respectively. Electrode connected to inner P type semiconductor layer is known as the ‘gate’. In operation, thyristor acts conducting when a pulse is provided to the gate. It has three modes of operation known as ‘reverse blocking mode’, ‘forward blocking mode’ and ‘forward conducting mode’. Once the gate is triggered with the pulse, thyristor goes to the ‘forward conducting mode’ and keep conducting until the forward current become less than the threshold ‘holding current’. Thyristors are power devices and most of the times they are used in applications where high currents and voltages are involved. The most used thyristor application is controlling alternating currents. IGBT is a semiconductor device with three terminals known as ‘Emitter’, ‘Collector’ and ‘Gate’. It is a type of transistor, which can handle a higher amount of power and has a higher switching speed making it high efficient. IGBT has been introduced to the market in 1980s. IGBT is has the combined features of both MOSFET and bipolar junction transistor (BJT). It is gate driven like MOSFET and has current voltage characteristics like BJTs. Therefore, it has the advantages of both high current handling capability and ease of control. IGBT modules (consists of a number of devices) handle kilowatts of power.